As for any early 1990's operating system (especially Unix), installing Amix is not completely straight-forward. Here are some notes to help you through the process on either real hardware or in WinUAE/FS-UAE emulators on a PC. 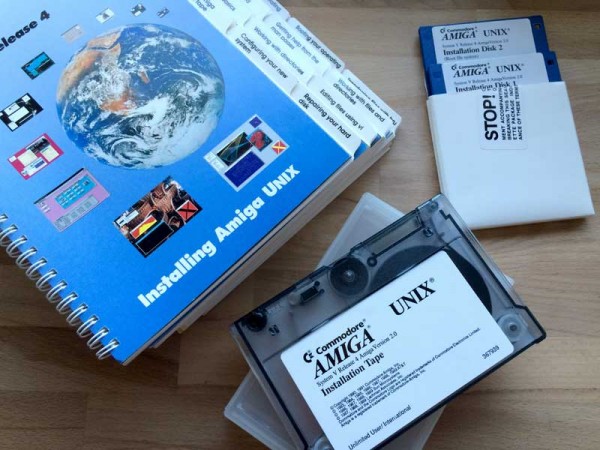 Required stuff (both emulator and on real hardware installation):

*) The SCSI addresses are critical, they are hard-coded into the installation script.

The WinUAE Amiga emulator has supported running Amix since 2013 (version 2.7.0 onwards). Users of macOS and Linux can also run WinUAE with WINE (outside the scope of this article).

Configure WinUAE to use the following options. Options not listed explicitly should be left at their defaults.

Memory: AMIX kernel is hard-coded to recognize only 4-16 megs of Fast RAM. RAM cards will not work since the kernel seems to map the memory address of the SCSI drive wrong with any more than 16 MB RAM. Apparently you can add 32-bit memory to your config: AMIX will ignore it. This might be useful if you go to install a dual-booting system and want to add RAM that will work in Workbench side.

Hard disks and partitions The minimum installation of AMIX 2.1 takes less than 70 MB of space, installing everything on the tape takes about 300 MB. Do not attempt to use too big hard disk image, you are likely to run intro trouble! At least up to 4GB drives should work fine. You can leave empty space during partitioning if you want to install Workbench on the disk too.

You are ready to go - Start!

Power the system on, and the floppy will begin to boot. Once the drive light goes out it may take a few seconds for the next prompt to appear, so don't be too concerned if nothing happens right away.

Note that if you have an Amiga that requires a superkick floppy you do not need to load kickstart before loading AMIX. In fact it just takes up RAM, so don't load it unless you want to run AmigaOS. 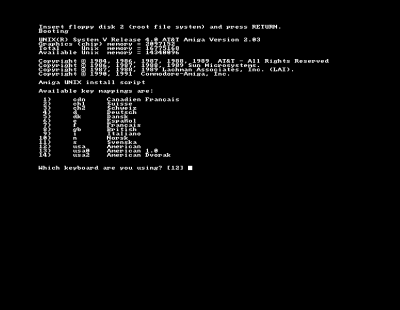 First prompt is for language. Select wisely (the default is what most people will want). Then it's going to ask you “do you want to install or repair”? In all dialogs the selection shown in square brackets is the default option and pressing return will select that. To select other option, type it and press return.

The next prompt will be to insert the UNIX install tape. If you attached it earlier to SCSI4, just proceed, otherwise do it now! If the install fails on the tape, you'll need to restart it.

The script will check for a suitable UNIX partition table on the attached drives. If it finds one that's suitable — great! If not, you will need to create one. Be sure to read the notes above regarding large drives and partition sizes. Most importantly, keep your partitions in the neighborhood of 1GB, max. And make swap. Lots of swap.

Once that's all set up, you'll be prompted to choose the filesystem type. Default is s5 filesystem, but choose ufs filesystem instead. Trust me.

After the filesystem type has been selected, you are prompted for the type of installation. Unless you are desperately short on drive space, it's highly recommended that you opt to install everything. It takes longer, but it's much faster than digging up what you want off the tape later on. That being said, knock yourself out if you'd like to try manually adding packages later on.

Filesystems are created. This will, like the script says, take some time. Next the script helpfully retensions the tape, which takes even more time. Then it reads the tape and installs the packages, which takes freaking forever so go do something else for a while. The installation manual states that “The standard installation takes about an hour; installing all the packages takes longer”. 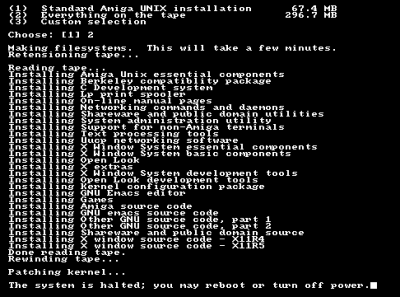 After the package installation is complete, the kernel will be patched and you will be prompted to reboot the system. Remove floppies and the tape. Use CTRL-Amiga-Amiga to reboot into your new system and begin the post-installation phase. Almost done!

Immediately upon reboot you will be given a series of prompts to finish configuring your system.

First prompt is for nodename of the machine. This is the same as the hostname, for example “amix” or “amixbox” or something. It doesn't really matter what you call it as long as it is unique on your network (if you have no network, it doesn't matter at all). The next prompt is for domain name, you can take the default or put in bogus.com or whatever you like.

Timezone is next. The default is Eastern time. Pick your time zone. You will be asked to set the date. At this point you can't set it beyond 1999, so don't try. Just enter like 123199 for the date for now, you can fix it later. You'll be asked for the time, go ahead and set that to the correct time.

Password assignment is next. You should set a password to all the accounts prompted for, otherwise they will be blank! You can create a user account here, this is recommended as well.

Finally, you will be asked if you are using a high resolution monitor. If you are not using an A2041 board, at this point always answer NO to this and to the following “X windows for a color graphics card” question. Its probably safer to set those up later, if you have them. If you're running 2.1 you will be prompted about Netnews… answer appropriately (probably no). At this point configuration of the system is completed and it will finish booting to a login prompt.

Congratulations, you now have a working Amix setup!

Now would be a good time to take a backup of the hard disk image. The file will be couple of gigs (depenging on the size you selected) but it will be worth it if the installation gets borked (which will happen easier than you might think).

Before you begin settling in you'll probably want to install the 2.1 patch disk and replace the built-in setclk with a version that is Y2K compatible (otherwise you'll get 'date: bad conversion' errors).

Remember to use shutdown command before turning off power (or stopping the emulator)!

Details coming later. Basically just duplicate the settings described above for WinUAE and add the tape drive configuration manually into the config file (as currently there are no GUI options to do this). See the example below (last line is the tape drive config pointing to a directory with the tape files). “hard_drive_0_type = rdb” seems to be required (as the installer won't detect any drives without it).

Thanks to Warty on EAB forums.

Tips: set floppy speed to 200% and while installer is copying files, switch to warp mode (cmd+W) to save some time installing. While in warp mode, screen refresh might get corrupted, but it will clear once you deactivate warp mode.