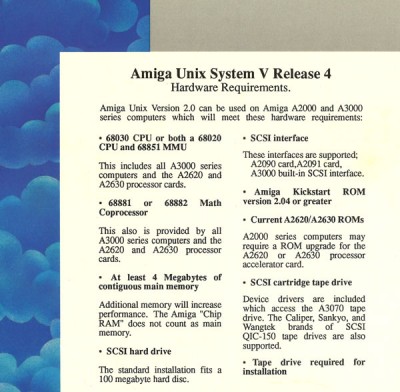 Here's the one liner: you need an Amiga with full 68020/68030 CPU including a MMU and FPU, with either A3000 internal SCSI or an A2091/A2090 board. If you do not have this you probably cannot run Amiga UNIX. You may be able to get into a kind of single-user mode using the boot floppies, by hitting CTRL-C when the installation script starts to run. However, this would still require a 68020/68030 at a minimum.

The A3000UX is no different from a standard A3000 except for the 3000UX badging, and a default configuration consisting of a 200MB HD and at least 8MB fast RAM. Amiga UNIX was also preinstalled. All other features were optional, usual expansions were A2065 Ethernet board and the A3070 tape drive.

The last four boards have blitter support, all boards support panning of virtual/oversized screens. The limitation to ZorroII mode is because the AMIX memory mapping system can't deal with ZorroIII boards and the source for the important parts is not provided with AMIX…

I left out segmented boards (PicassoII in segmented mode, Retina Z2) because of workload and performance reasons…

Assumed to work (but not tested)

Wanted - if you know more of compatible/incompatible devices, please let us know!

What graphics cards work with X11R5 in Amiga Unix?